I have no fear of depths

I often spend a snatched coffee break browsing through the endless pages of American website Spoonflower. Spoonflower is a site that allows people to upload designs, then order those designs printed onto fabric. I often ogle the strange and ingenious compositions I find hidden in the depths there, such as this 'Oak Veneer' print, which presumably would allow me to camouflage myself Sherlock Holmes-style as a table, or like this amazing fantasy landscape, complete with rainbow coloured sky.

Despite my friend, ex-housemate and serial DIYcouture model Angela designing digital prints for a living, I have never had a go at doing it myself. One of the great things about designing for the catwalk must be that you get to decide upon the weave or the print of the fabrics used to make your clothing. I love fabric shopping on the high street, but of course I am buying other people's ideas. I thought the possibility that one could be totally in control of ones one clothing, from start to finish, irresistible. 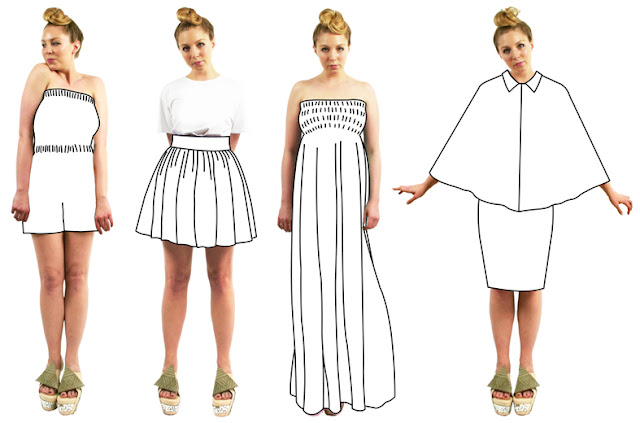 I decided to ask Melanie and Emma at The People's Print whether they would like to work together to launch a fabric design competition for DIYcouture's SS13 collection.

I asked them whether I could link to one of their tutorials, enabling anyone - not just textile designers - to create fabric designs. I had worked with them before, sewing a piece of clothing with fabric designed using their Great British Floral tutorial. We liked the idea that using DIYcouture instructions and The People's Print tutorials, people without any design experience could learn to create completely bespoke clothing from scratch.

Rather than linking to an existing set of instructions, Melanie went one step further and suggested we create a dedicated tutorial for the competition. We played with some titles, all of which were concerned with adventure, exploration and freedom, which this competition would be for us as much as for anyone else. Our contenders included:

"I know not all that may be coming, but be it what it will, I'll go to it laughing"
- Herman Melville in Moby Dick

"I love to sail forbidden seas, and land on barbarous coasts."
- Herman Melville

But we settled on a quote, both short and sweet, from writer Anais Nin. The full sentence reads "I must be a mermaid, Rango. I have no fear of depths and a great fear of shallow living," but we chose to take a small bite from it to use as our competition title:

"I have no fear of depths."

With a title to work with , we set forth to experiment. Whilst swimming one day, Melanie had the idea that we might be able to fill empty jars with various sparkling bits and bobs and coloured dyes, to create photographs that had depth and movement and could be used to make textured fabric designs. I collected materials for the job. 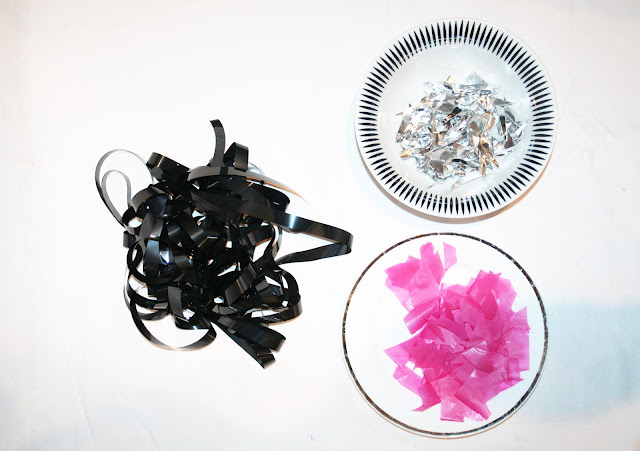 I cut up baking foil into slices and destroyed a video from a charity shop as I thought the tape itself might float in a seaweed-like manner. 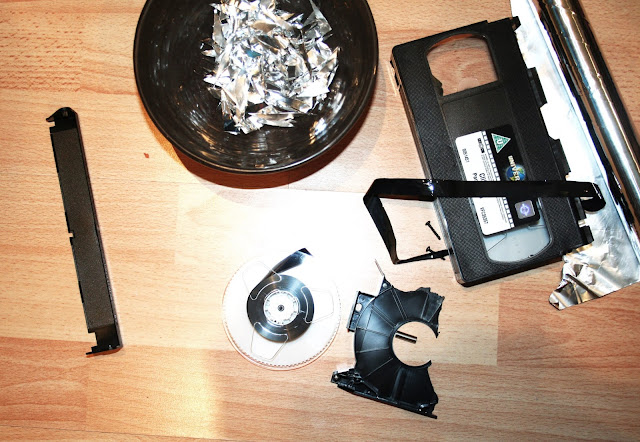 I purchased a fairly massive glass jar and scattered my materials into inky blue water. Alas, the result was a bit of an ugly mess. 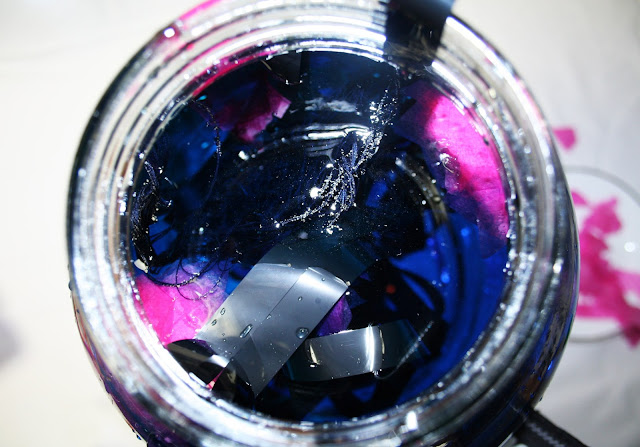 Though I created something that looked more like it could be used on a poster for Buddhist aqua yoga, I did learn that clingfilm is extremely buoyant and no amount of poking it with a broken bit of VHS will cause it to sit anywhere other than the surface of water! An important lesson!! 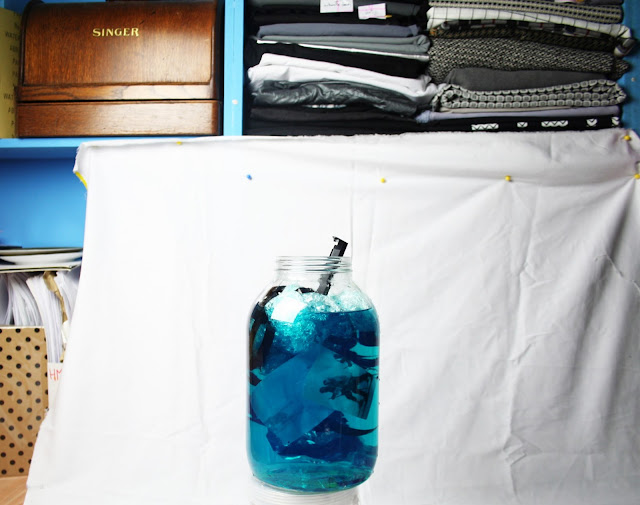 This is also definitely the most interesting collection of substances to ever sit in my colander. 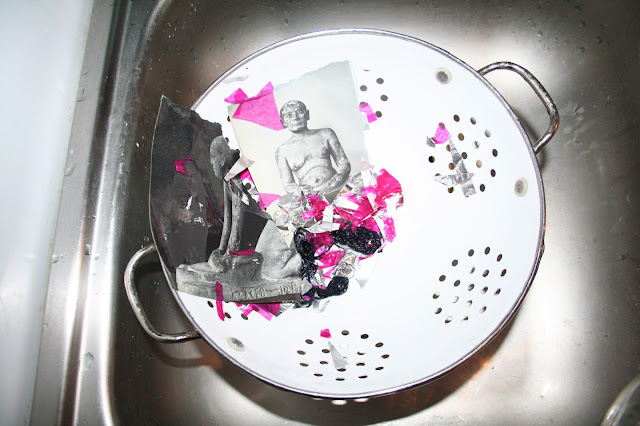 We scrapped the jar idea, as it seemed far too complicated. I spent the afternoon at Chelsea College with Melanie, where we kept our hands dry and experimented instead with collage. As Momtaz, who runs a craft night called The Make Escape in my local cinema Tweeted: "@TheMakeEscape has taught me that EVERYONE loves collage - it's the most fun art & craft activity there is."

I brought along some old National Geographic magazines, some nature and travel books I found in my local charity shop, some plastic toy animals and some printed pictures of me in adventurous poses. 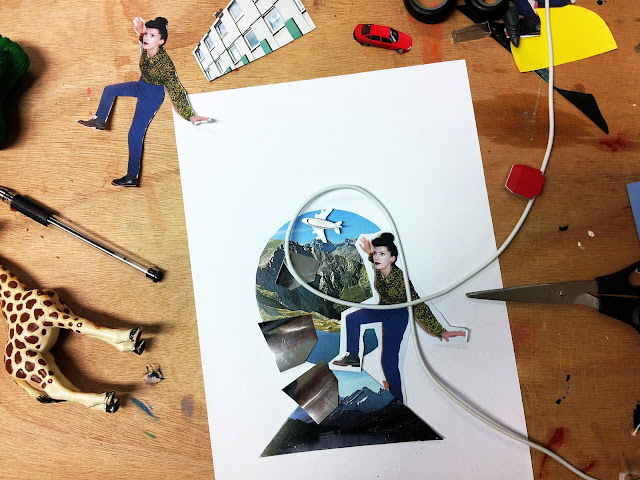 Whilst in the offices we just so happened to stumble across an enormous box full of snow globes. Here is a small selection, but the box we found must have contained about two hundred, dusty, forgotten, specimens. 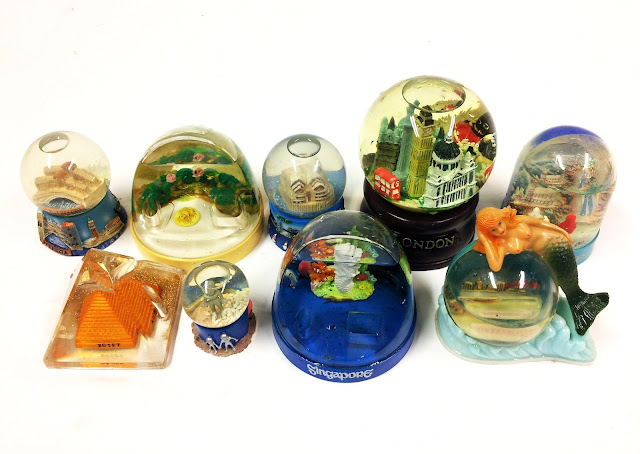 This awakened in us the idea of creating enclosed fantasy worlds, and we experimented with making some in collage form. This is the first repeat we came up with. 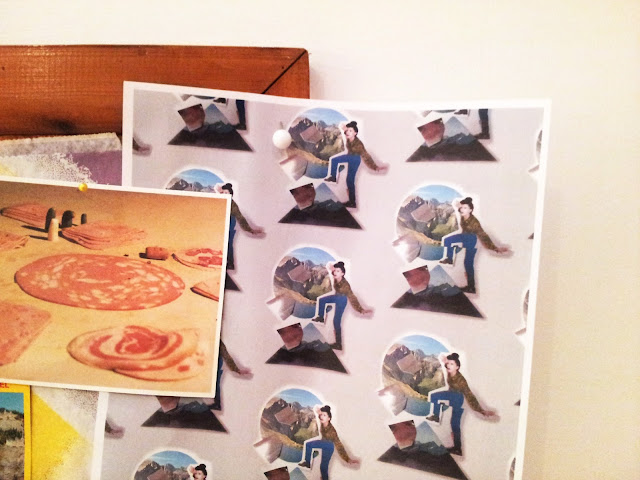 With an idea we liked, we went our separate ways to experiment. It was great to have a serious excuse to spend a morning playing with glue, scissors and photographs. My first adventure was perhaps influenced by the giant jar full of blue liquid, and took place under water. 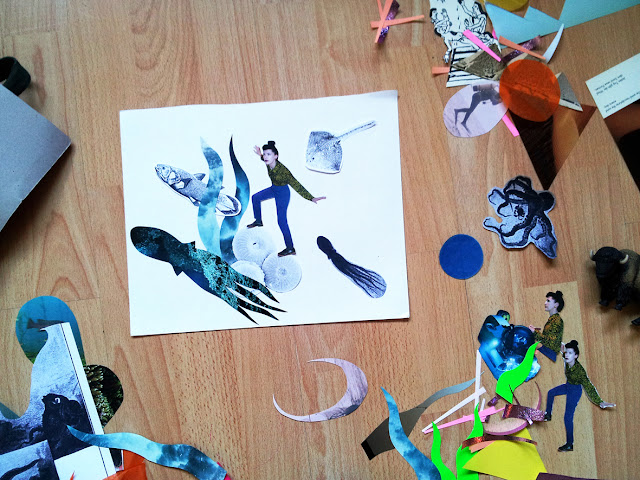 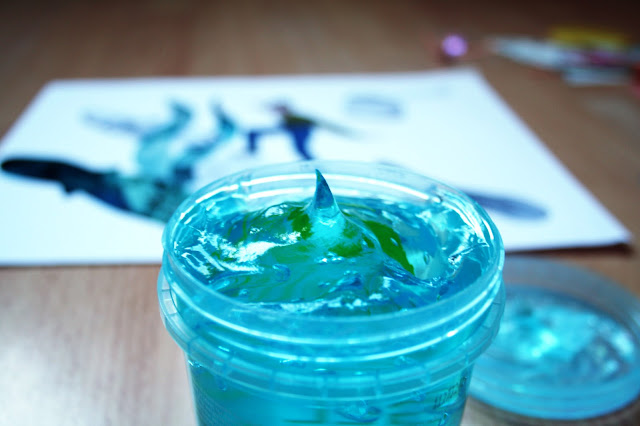 ...and used it to create a liquidy blob in my collage. 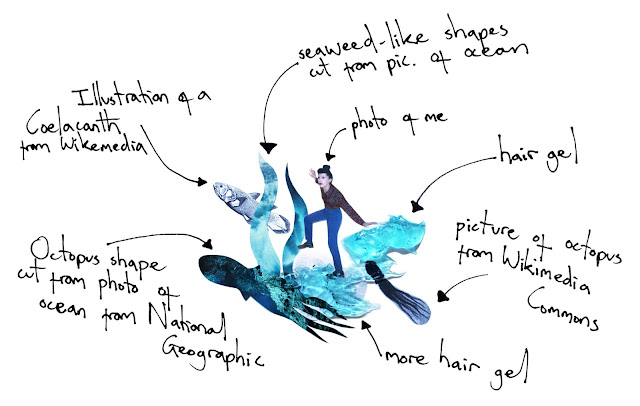 At this stage I still had no idea how to make a perfectly repeating pattern, so I bashed this together on Photoshop using a lot of rulers! It may look like a perfect repeat but it isn't! 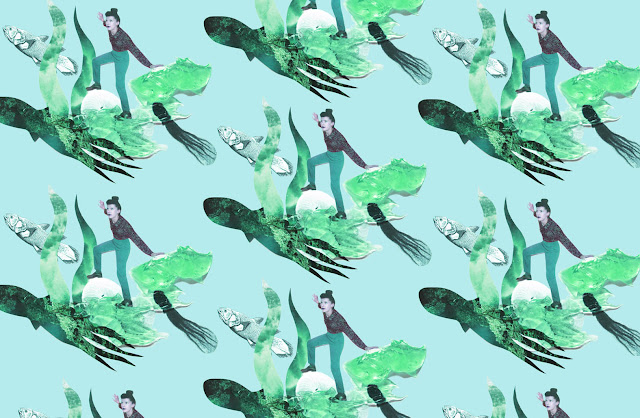 Next I went to a land of red sand and wild horses, inspired by this snow (dust?) globe... 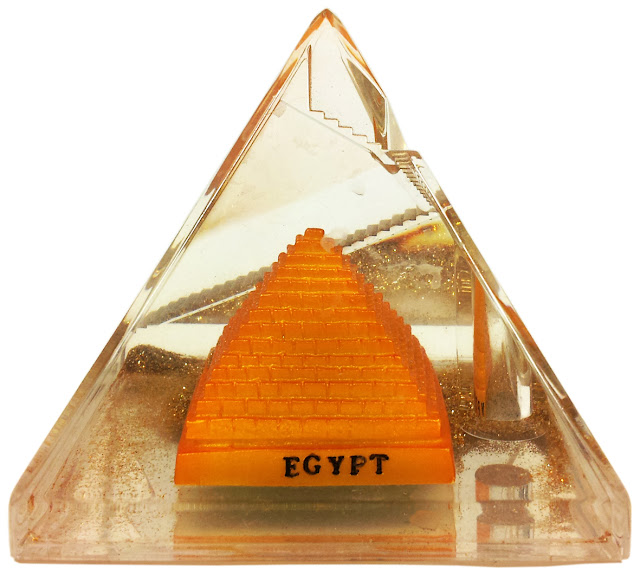 ...and this picture of a rancher I found in a second hand book about Venezuala. 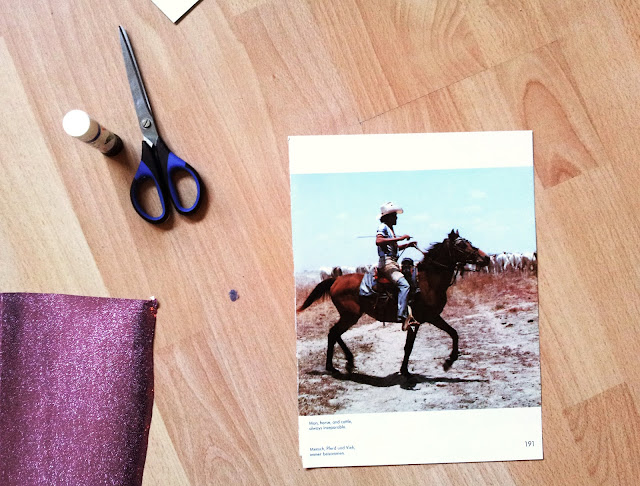 I created a Wild-West/Ancient Egypt mash-up, with a boiling crimson sun made of tissue paper. Someone is having their heart torn out on the left, but try not to think about it. 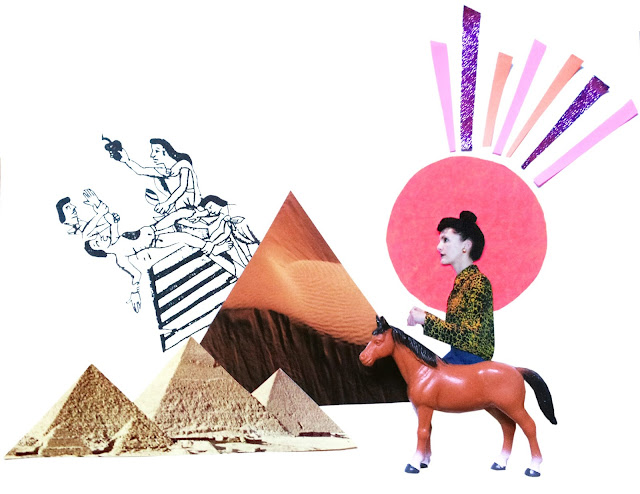 You may be wondering whether the picture of me was taken as I rode a camel across the dunes of Morocco and I'm sad to say it is not. Here is the original image - just me on an Ikea stool in my flat! 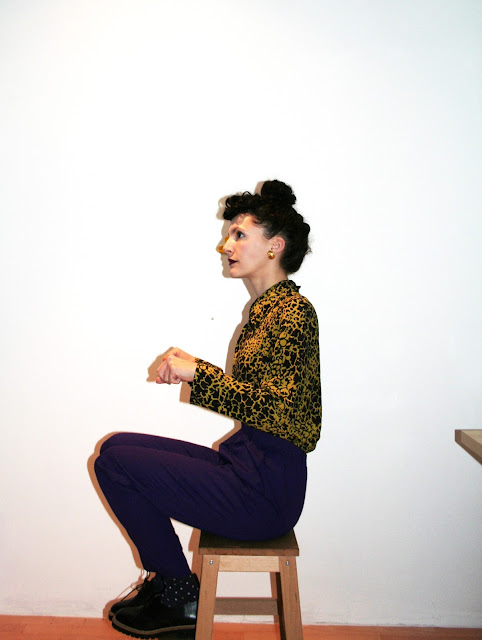 With my first go at using The People's Print tutorial, I dropped in a cactus that I found on the internet and voila! My first proper attempt at a repeat! I would quite like to wear a shirt made out of this fabric. 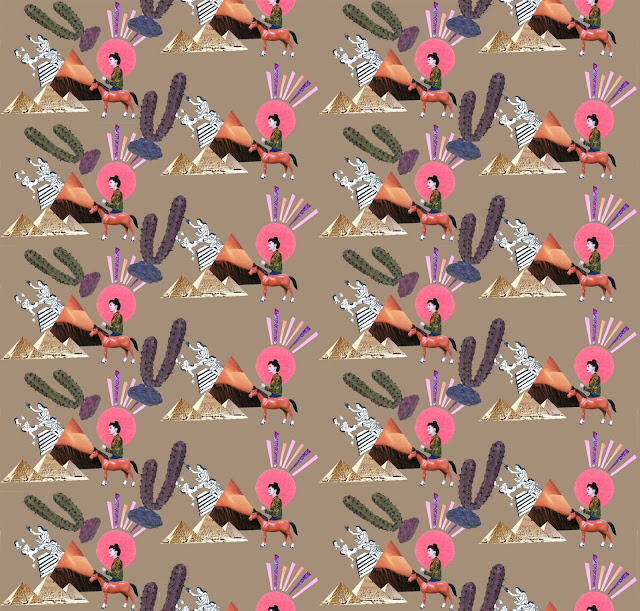 Next I took a trip to outer space, inspired by this little chap, freezing to death somewhere in the American Midwest during winter and wondering why he decided to invade planet earth. 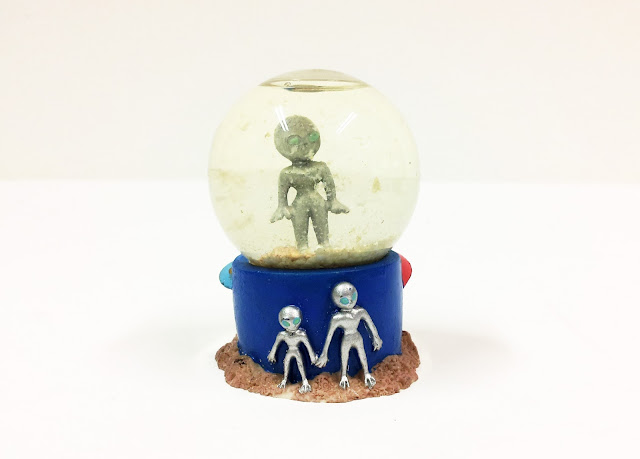 I also took inspiration from the many pictures of adventurous astronauts that can be found on the NASA website. I've collected some of these on one of the Pinterest mood boards for this competition. 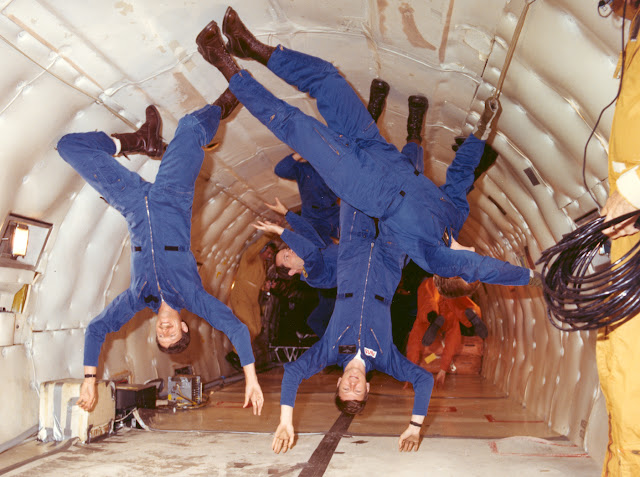 I used some of my boyfriend's toy robots and a picture of an actual space ship that NASA attempted to build, which  I found on Wikimedia Commons - a great place to look for copyright-free images. That fluorescent yellow thing at the top of the photo below is a dish scourer, which I thought might look good as part of a collage, but I never actually used. 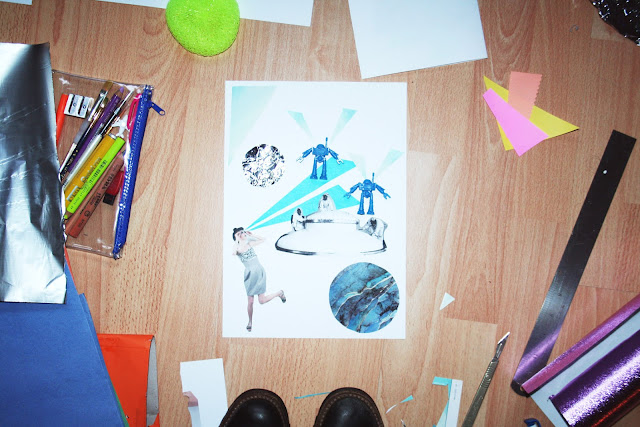 I was feeling like a textile design pro by this stage, and created this clean looking repeat using Melanie's instructions. 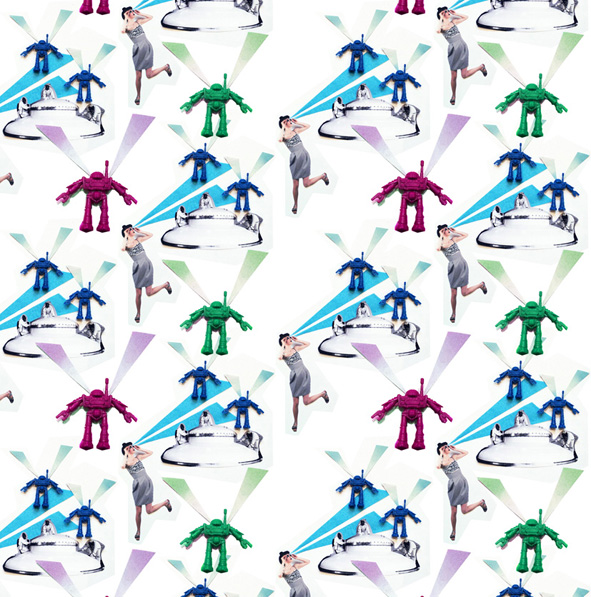 Finally I went deep into the jungle, inspired by this image from colonial times, both beautiful and sad. 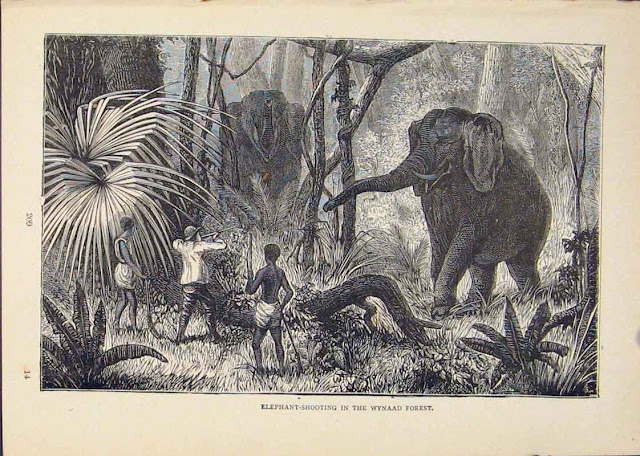 I made this leafy green collage with bits of coloured paper and included a plastic golden pineapple that my sister's boyfriend bought back from Hong Kong. The pineapple had inside it some chocolate that mysteriously would not melt. 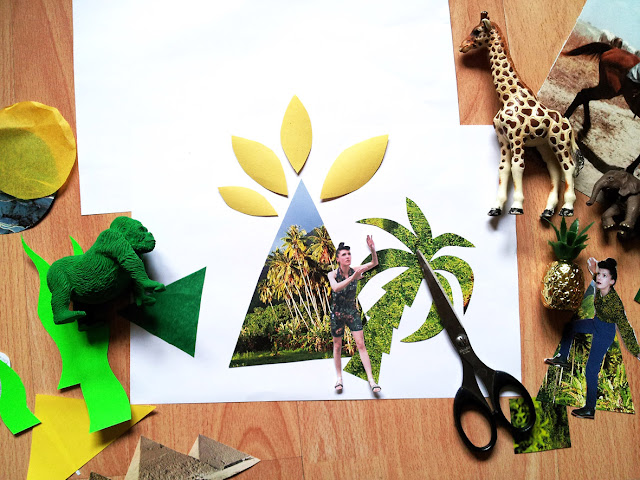 This is the collage that Melanie includes in her final The People's Print tutorial. 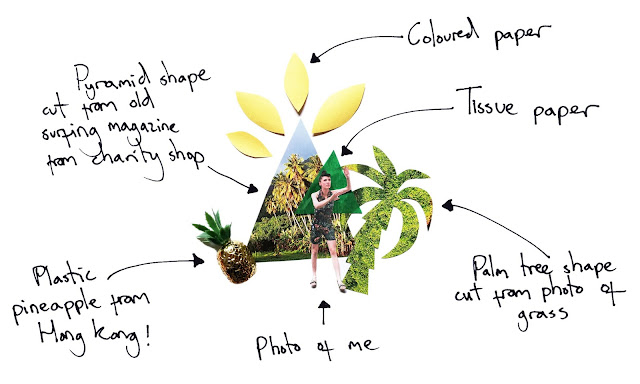 A quick GIF to show the collage coming together.

And finally, the perfect repeat design! 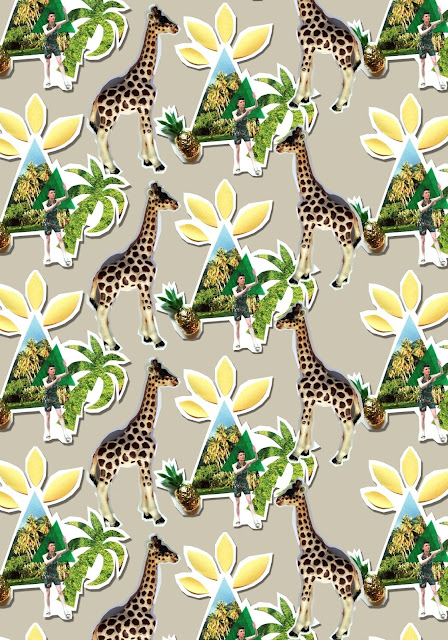 It's very exciting to see that people have already been uploading their designs to our dedicated Facebook page!

Both Melanie and I have been eagerly watching (via the internet) developments at BeFab - a new fully accessible digital printing bureau recently set up by two sisters in Edinburgh. We contacted them to see if their printers are ready to go and great news; they are.

So we are really happy that BeFab are offering the winners of our fabric design competition vouchers to spend on their fabric printing services. BeFab will also be printing the winning fabrics, so that they can be sewn into DIYcouture's next collection, hopefully serving to inspire people not only to make their own clothes but to make their own fabrics too. 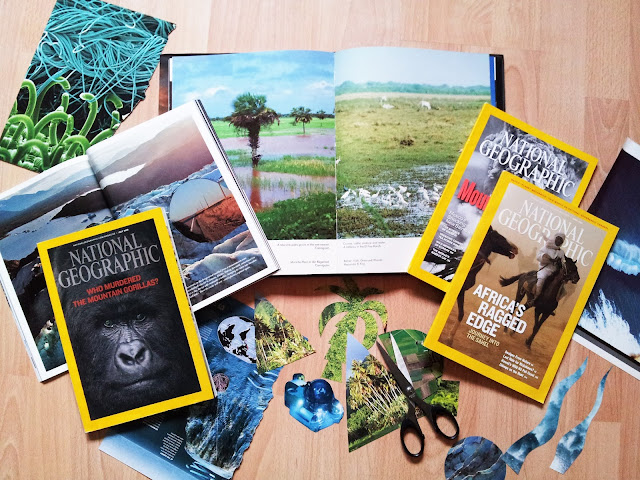 I have never had so much fun working on a project and I would love to encourage everyone to get out your scissors and participate. Collaging is great fun and demands no inherent artistic ability. It is an un-intimidating art form, as there is never a moment where you have to commit to one arrangement. You can lay out your collected bits and bobs and keep mixing them around on your paper until you have found a structure you like. You don't even need to glue it down, just photograph it and away you go. The People's Print tutorial carefully guides you through the processes that will turn your simple collage into a digital repeat.

One of the philosophies behind both DIYcouture and The People's Print is that creativity is not exclusive. You don't need to have studied fashion for three years to be able to sew nice clothes, and you don't need to have been to art school to create good looking digital repeats.

This competition is new water for us. We hope it will help to make totally bespoke clothing accessible to all. Please do get involved in the adventure!

For a full design brief and links to all relevant material, including The People's Print tutorial, please follow this link : )