The most ethical sweater on the planet?

I made this sweater out of the most responsible fabric on the planet. It's amazing what fabric can be made from. It can be made from recycled wood chips, it can be made from spoilt milk, apparently it can be made from bananas, pineapples and coconuts. This fabric is made from plastic bottles that have been thrown away on on the streets of Haiti - which doesn't have a waste collection system - picked up, transformed into thread, then woven into a textile. 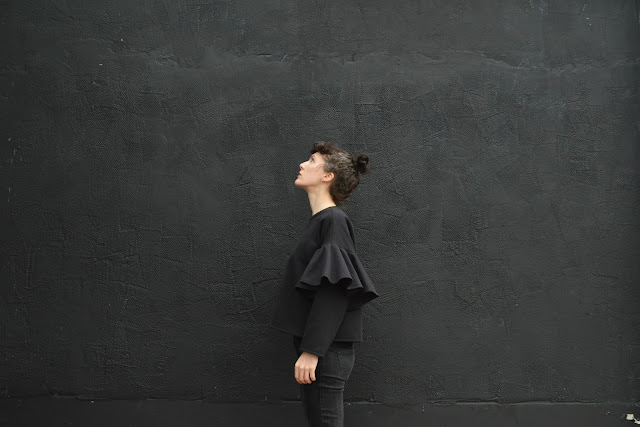 This genius process has been conceived by Thread International, a Pittsburgh-based startup founded by Ian Rosenberger in the wake of the Haitian earthquake of 2010, and he states "I started Thread because I believe fabric can end poverty." Ian visited Hiati and facing mountains of discarded plastic bottles, wrote in his diary "Maybe this trash could be turned into something good." 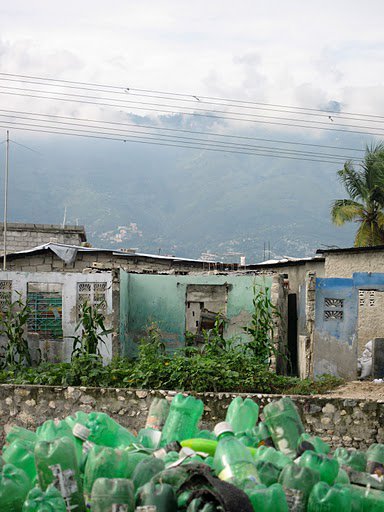 He also recognised that transparency was - as it still is - really hard to find in textile supply chains. I like this quote from Ian:

"When you buy a piece of clothing, way more people than you might think work very hard to get it to your door. A lot of attention is paid to the last mile of this process and making sure your stuff makes it to you quickly and accurately, but it’s the first mile of your clothes-where the materials for your goods are grown, collected, and sourced-that’s probably more important. These parts of supply chains have millions of people in them and they, for the most part, are still ignored by pretty much everybody." 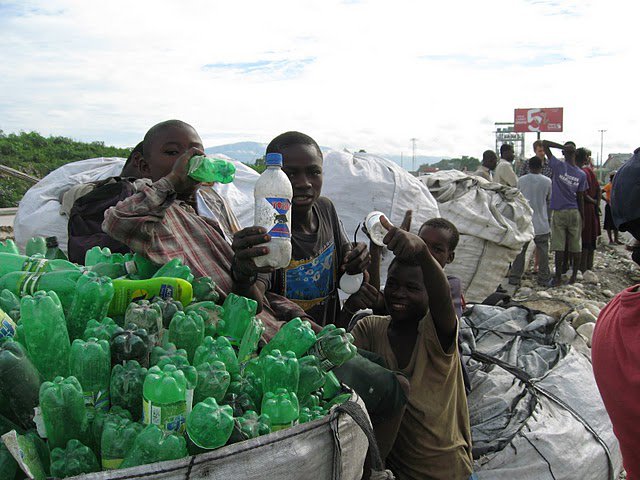 As people that make our own clothes, I think we have a much greater awareness of the labour that goes into producing a garment. I personally pursued sewing with renewed fervour in around 2005 as I increased my knowledge of global supply chains and exploitative employment practices in major brands and decided that sewing my own was a way of opting out of spending money on companies that consciously practice injustice as a way of increasing profit. 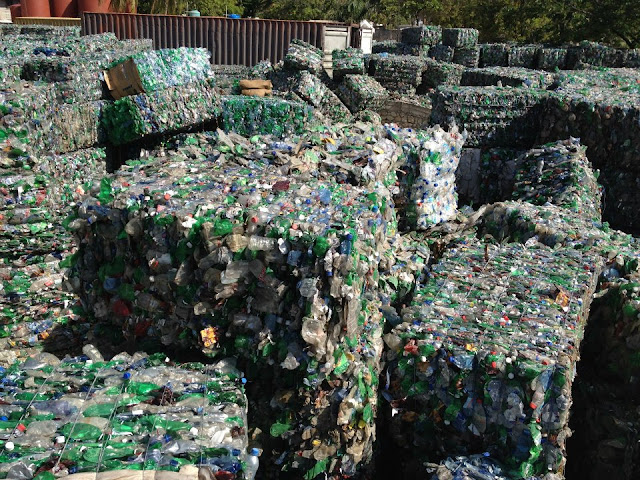 Thread state on their website, "Clothing isn't born in factories. It begins as a raw material sourced by real people." As sewists, we are confident that our clothing wasn't born in a factory. It was born through our own labour we believe, but of course, we aren't at the very start of the supply chain.

I love fabric shopping in London, and part of the enjoyment comes from the feeling that I am part of an old school industry. Measurement is sometimes done in yards, there are no electronic tills, instead sums are scribbled out in biro on pieces of thin paper. Nothing has a price, you have to ask and can then challenge the figure given. But it's unlike most other shopping I do (which is basically food shopping!) There is little to no labelling. Information is all verbal, and the kind of questions I ask are 'is this a cotton poly blend?' not 'where did this come from?' Let's face it, as a fabric buyer we don't have much knowledge of or control over where our fabric came from.

But I know exactly where this fabric came from. 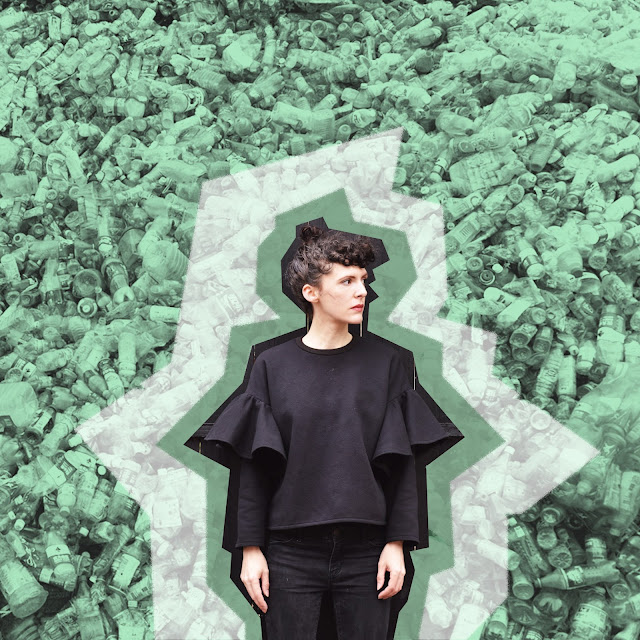 It came from here. 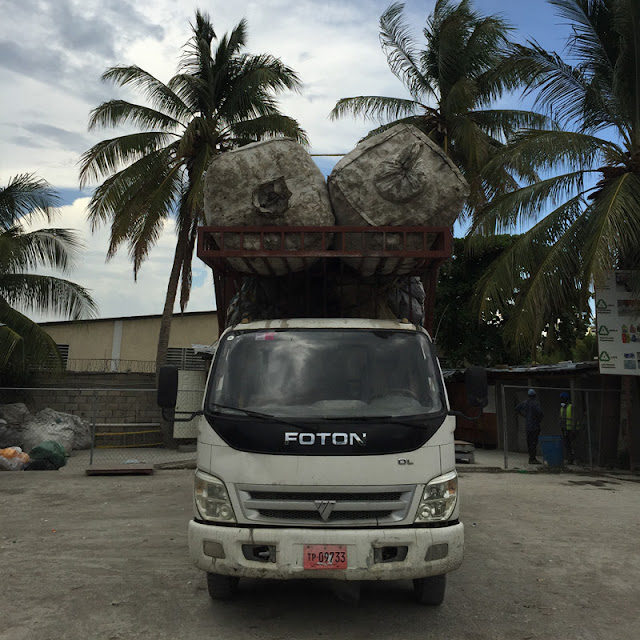 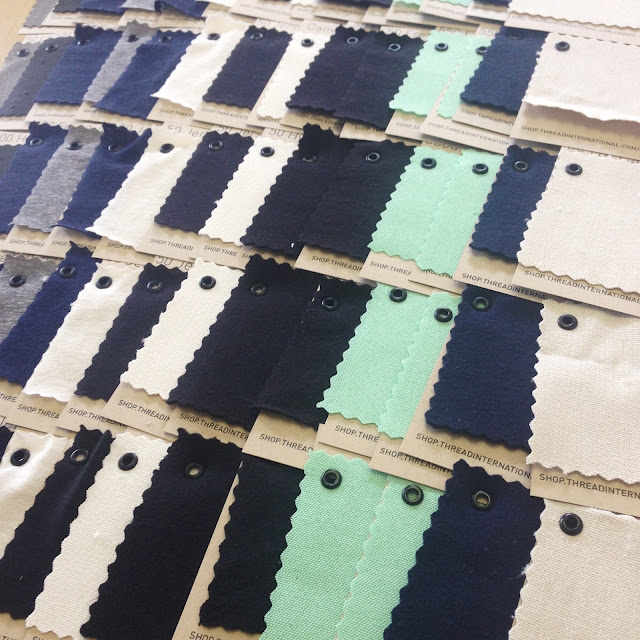 And this is one of the softest, warmest sweater fleeces I have ever come across. In fact it has an organic feel to it, the quality is so good, which is weird when you think that a plastic bottles must be one of the most inorganic objects on earth. 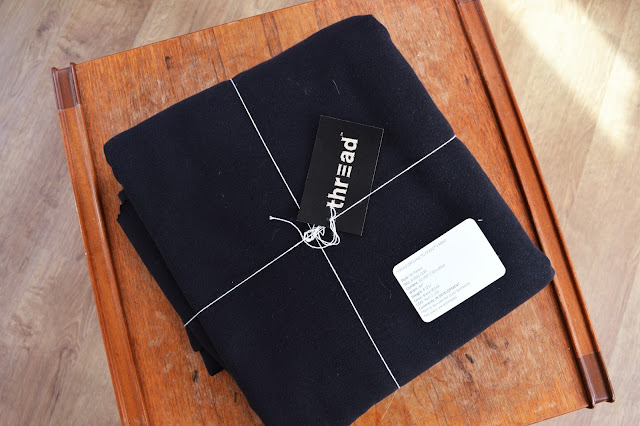 Unfortunately, in what I consider classic Rosie-style, I've moved into a phase of sewing plain black clothes at exactly the same time I have acquired two mostly-white cats. 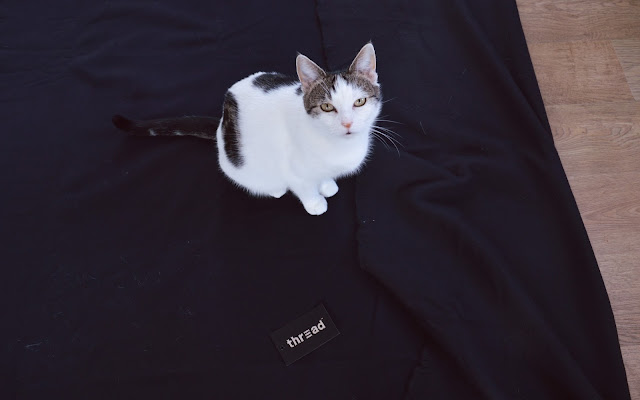 I decided I wanted to make a cosy sweater with a dramatic sleeve. Something very much like this... 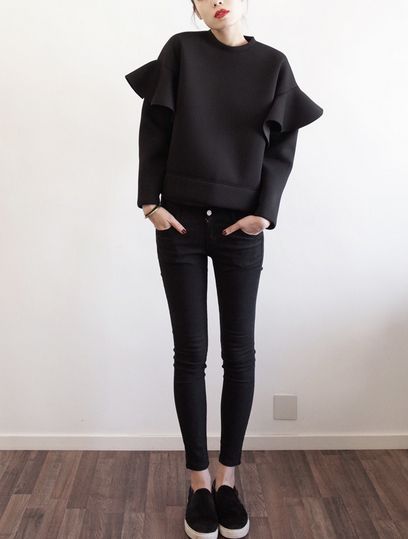 But with a hint of the Cape Sleeved Top from my book. 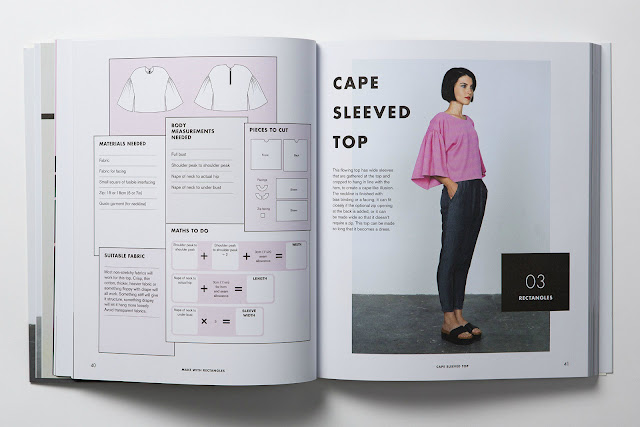 Here's my rough sketch of the intended outcome. Just a simple drop shoulder sweater with a big fat ruffle added on each side at the sleeve cap! 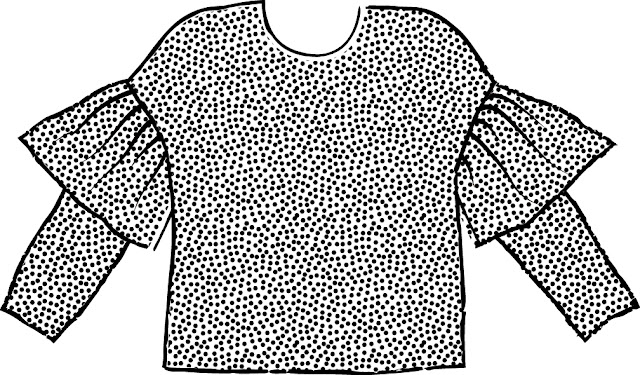 I decided to make the ruffles out of full circles for maximum, with the centres cut out to make donut shapes. I roughly traced round an old jumper to make the pattern, and I extended the shoulders so the 'drop' would be lower and the ruffle wouldn't sit too high up. To get the ruffle size I measured the full distance around the top edge of the sleeve after sewing it into a tube and found a bowl just a little bit bigger than that, which I used to mark out the central hole of my donuts. 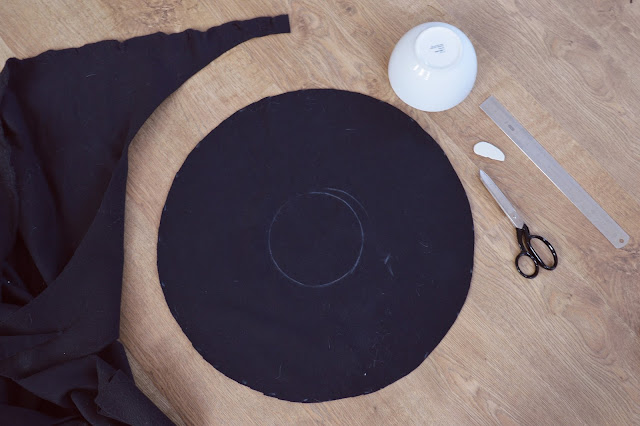 The other cat decided to get involved at this point. I feel I must credit everyone who participated in the making of this sweater! 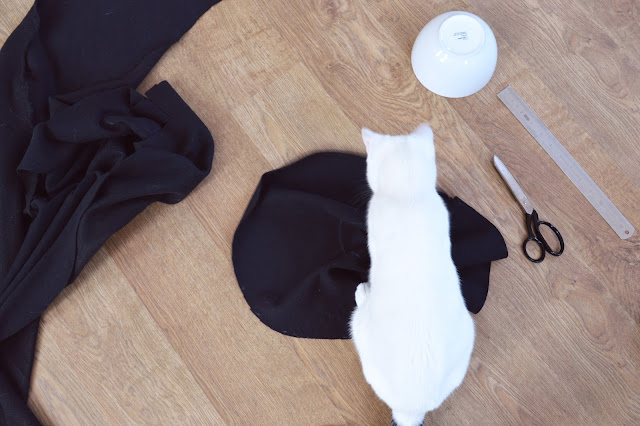 Having sewn a line of straight stitch all the way around each circle 1cm in from the edge to act as a pressing guide, I hemmed each circle with a simple single turned hem. I constructed the main body of the sweater, then sewed the donuts into place, gathering slightly, then I added the sleeves. If anyone wants me to draw diagrams to show the construction process do let me know!

I left the house to shoot my creation with the goal of getting to this patchy black wall, which I pass whenever I take the tube. There are some streets in London that seem perfectly angled to channel and amplify all wind in the vicinity, and this happens to be one. Not good for shooting enormous ruffled sleeves!

It was generally a windy morning, so there were a lot of wild shots with ruffles blown every which way. I like this one as I feel I express something of the spirit of Bjork milliseconds before she punched that journalist in the face. Only my enemy is the wind. 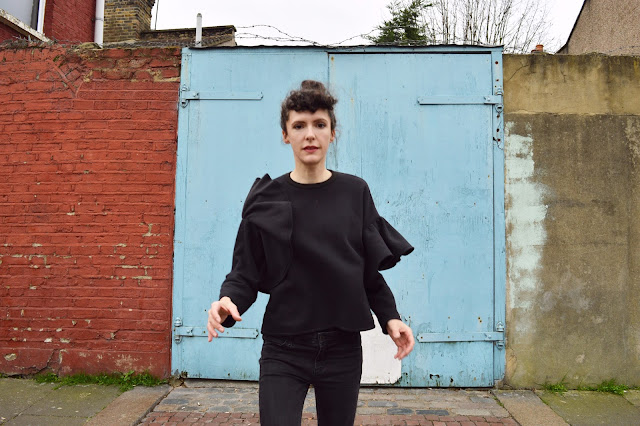 I call this one 'Goth Behind A Tree.' 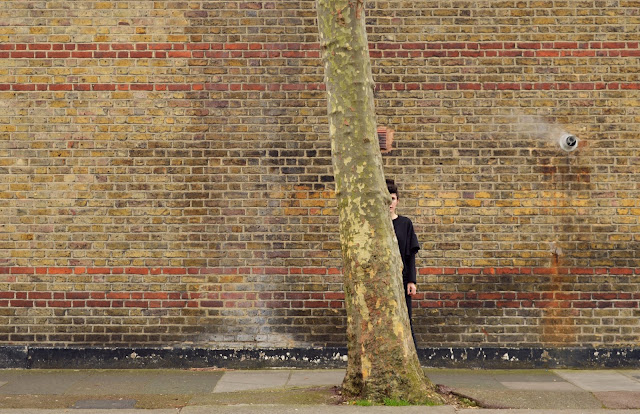 I'm still new in my 'hood so I'm getting to know the streets. It's not the fanciest of the London boroughs, but there are some excellent walls and doors. 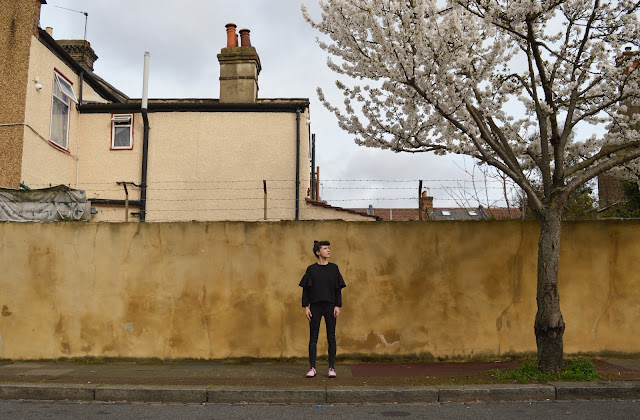 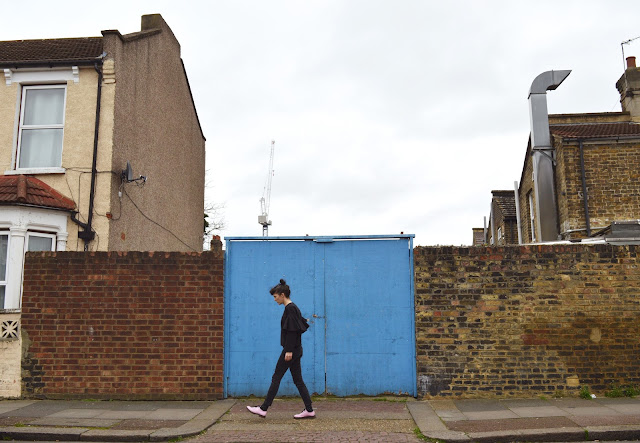 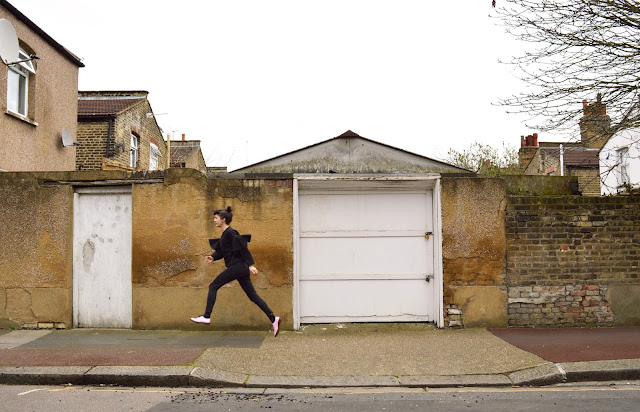 My jet black wings make me feel pretty witchy. Partly I think it's the dark art of transformation involved in sewing that makes it so compelling - that a flat fabric can be transformed into a wearable construct. We know how many hours, broken pins and swear words we put into that transmutation, but when the garment is complete it feels almost like we waved a wand.

And the transformation from discarded plastic container to a flexible, breathable fibre does feel like a kind of magic. I am wearing a drink container that was chucked away in Haiti. It's metamorphasised so many times since it was picked up off the street. It's been transformed by those that collected it from a rejected object into a valuable resource. It's been transformed by those that processed it from a hard plastic into a soft fibre and that fibre has helped transform the lives of all those involved in the process. Finally, I have cut up their product and turned into a piece of clothing that's being regularly worn. 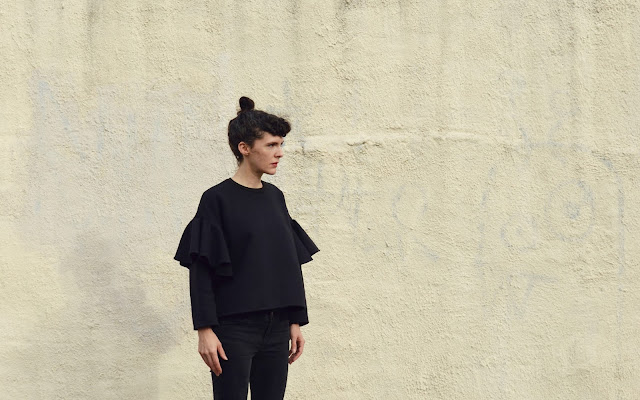 Thread say on their website that they "take trash and turn it into jobs and useful stuff people love." I'm really glad I found Thread and got to make some useful stuff off the back of their wizadry. I hope they can spread their alchemy far and wide through the fashion and home sewing industries.